A week ago today, in avid anticipation, I punched in a search for the weekend forecast at Stokes Bay. The prediction read something along the lines of 4knts from the SW veering to the NE as Saturday progressed, and for the Sunday, a big fat zero stared right back at me. Ouch! Still, the boats were loaded on the double stacker, travels plans made; I was committed.

Saturday arrived and the journey was made. On approach to the club, driving along Hampshire's equivalent of Malibu Beach, our eyes were wandering over the Solent looking for reasons to be cheerful. The sun was shining, and quite brightly too; but there was, as predicted, little wind. First decision of note was to order myself up a bacon/egg sandwich, more out of necessity than desire. Out in the boat park, boats were arriving, 18 in all, bolstered with the presence of the RS800s and B14s. I sensed early season optimism, even over hearing a discussion of sea breeze.

With boat rigged, I wound on the tension looking for max power. I did take a cursory glance over my shoulder towards the race course and noted a yacht moving with pace. There was some wind after all. Things were looking up. It was time to get changed and dose myself up with bucket loads of rehydration tonic.

On the water I was pleasantly surprised with a solid 8+ kts from the SW - enough to keep me and winter coat on the wire at least. The race course presented the usual Stokes Bay conundrum of trying to find the best comprise in terms of tidal, wind and sea state advantages. From my perspective I felt my way up the first beat, badly as it turned out, taking note that the boats standing further out into the channel were making the best gains. Tide was my bet and so straight into a gybe hoist round the spacer mark and able to haul in a few boats downwind. And so the pattern was set; two long tacks into the channel upwind with a gybe inshore to ride back down in a steadily building breeze.

This pattern continued for Race 2 but in around 12kt, which pushed the chop ever steeper and the need for crabbing up and down the rack all the more important to keep the chute dry. Having nailed the start of Race 3 I continued out into the channel following the formula of earlier races despite observing all the local boats – with good reason too - heading up the shore looking for and finding protection from the tide. Still, I now knew where to go for the remaining 2 laps. Revised plan was now to hug the shore upwind and send it full tilt downwind in the lumpy channel, looped in and hanging low in 16kts with the belly of boat slamming down the waves. A number of boats were now falling victim of the conditions. 4kts forecast indeed – this was superb! 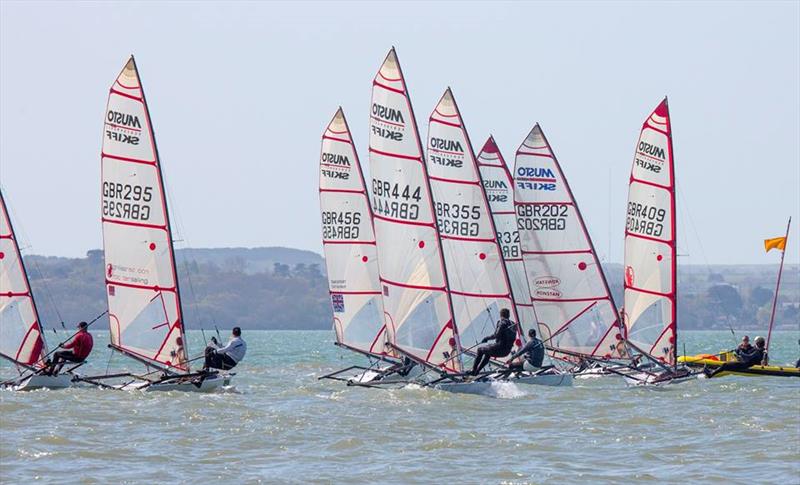 Race 4 and the wind was now 18kts gusting 20+. With arms now like jelly this was a case of pointing it in the right direction and not making (m)any mistakes.

Over the course of the day Richard Pelley in his aptly named 'Nemesis' put in a great performance, as did Dave-gerous Poston who was looking particularly quick. However, the show was stolen by Bruce Keen who chalked up four straight wins – which was a complete surprise to me as I didn't see him all day. I asked the other Stokes Bay lads if there had been some kind of mistake. They just 'yawned' and said "no".

Saturday night was spent in a lively clubhouse made all the more vibrant with a live band and sponsored bottles of Mount Gay. Sunday morning was less lively and could have been sponsored by the red-cross.

Out on the race course, the wind had dropped over night to around 5-10kts, and with the course set further offshore the tide was a big factor notably at mark roundings and on the start line where the big bad race officer was forced to air his black flag on numerous occasions. The Stokes Bay crowd were revelling in this stuff and cruised to an easy 1,2,3 in Race 5, but there was a minor fight back from 'Team Datchet' in sixth and final race where Ben Schooling claimed 2nd behind Mike Palfreman who dominated the race from start to finish.

So with the numbers totted up, Bruce claimed the weekend honours in convincing fashion from Richard Pelley in 2nd and Jamie Hilton in 3rd but he real winners were the 18 skiffs who were there to enjoy the first class conditions. Huge thanks too goes to Stokes Bay Sailing Club for the excellent racing, shore support and club house banter, more of which we've been promised for our return in mid-August for our 2014 National Championships.